The NOBU Conference 2019 was arranged 10-11 October in Tampere, Finland. A big thank you to everyone who participated!

People Matter: The Why of Practicing Leadership from the Library
Doug Adams – Librarian, Fort Worth Symphony Orchestra
Leadership occurs at all levels within an organization. This session will describe the exemplary leadership practices as set out in Kouzes & Posner’s The Leadership Challenge and explore how these practices can focus priorities to enhance all aspects of the librarian’s daily performance. The material discussed is appropriate for persons from all positions and from any organization.

Celebrating our 300th Anniversary: “Gustav Mahler – The Symphonies“ A New Critical Edition
Alexandra Krämer – Editor at Breitkopf & Härtel
This session wants to take you on a quick journey through the history of the oldest existing music-publishing house: Breitkopf & Härtel. One of our most ambiguous projects in the year of our 300th anniversary is the publication of all Gustav Mahler’s symphonies. The publication of the First Symphony in spring 2019 has spurred a certain amount of discussion and controversy. So what actually makes the Breitkopf edition a modern, scholarly critical edition? Without the “Breitkopf Urtext”-label, what can a user expect? What are the edition’s objective and special features, who is the target audience?

Whose music do we listen to? – Finnish symphony orchestras and music composed by women
Susanna Välimäki – Musicologist, the Universities of Turku and Helsinki
The session discusses the gender inequality in the current concert programmes of Finnish symphony orchestras, where works by women composers still are non-existent, rare or random coincidences. The focus of the presentation is on practices by which the problem can be overcome and by which gender fair programming and a socially responsible music culture can be fostered. The presentation also includes an excursion into historical women composers in Finland.

Understanding Wind Transpositions and Notation Conventions
Tommi Hyytinen – Horn Player, Finnish Radio Symphony Orchestra
Jarmo Hyväkkö – Principal Clarinet, Tampere Filharmonia
This session will take a closer look at clarinet and horn transpositions and why they exist. Why does clarinet transposition swap, and when? Are there historical or regional trends? What are the fundamentals of horn transpositions? What does the librarian need to know if there are natural horns in your orchestra? What are the different ways in which a horn part can be notated?

The Processes of Critically Editing Music
Douglas Woodfull-Harris – Music Editor, Bärenreiter-Verlag KG
Juhana Hautsalo – Music Librarian, Finnish National Opera & Ballet
This session focuses on the basic processes and methods of critically editing music. What are sources and how are sources found, evaluated, and their filiation determined? What is a stemma and how are errors determined, and do they matter in critical editing of music? Primary and secondary sources – what they are and how they are determined. How does the historical-critical method direct editorial decisions, and what will be done when authentic sources offer contradictory readings? How practical/playable should a critical edition be? Should notation practises be modernized, with the cost of deviating from the composer’s original? What kind of historical-critical information is useful for the player and what is distracting?

The KVAST Effect and Gender Equal Repertoire in Swedish Music Venues
– How Do We Get More Female Composers on the Stage?
Christin Högnabba – Project Manager at KVAST
KVAST (Kvinnlig Anhopning av Svenska Tonsättare, English approximation BROOM – Female Accumulation of Swedish Composers) is a nonprofit organization with the mission to get more works by female composers to be performed in Swedish concert venues and opera houses. The association is promoting the issue of female composers by being a interlocutor and a forum for ideas for female composers and new music. Christin Högnabba works in KVAST’s project Repertoarrycket III as project manager for orchestra and repertoire issues and presents the association’s strategic work by doing discussions with orchestras, work with the education sector, the repertoire bank, repertoire statistics, the study circle Rum för kvinnors musikskapande (A Room for Women’s Music Creation) and the presentation of the annual award Guldkvasten (Golden Broom).

Doug Adams
Mr. Adams is the Orchestra Librarian of the Fort Worth Symphony Orchestra. Prior to moving to Texas in 1998, he spent five seasons with the Dayton Philharmonic Orchestra working as librarian and section violinist. Doug studied violin performance at Bowling Green University and the University of Cincinnati College Conservatory of Music. He is currently chairperson of the MOLA Errata Committee.

Juhana Hautsalo
A native of Kuopio, Finland, Juhana Hautsalo began his violin studies at the age of five at the Kuopio conservatory. After graduation from high school, he entered the Helsinki University and earned an MA degree in musicology. From 2001 to 2006, Juhana was the principal music librarian of the Tapiola Sinfonietta in Espoo and since 2006, he has been a music librarian at the Finnish National Opera and Ballet. Juhana has been a member of the MOLA Education Committee since 2008 and is also serving on the European MOLA/Publisher Joint Committee and on the MOLA Board. When not in the library, Juhana enjoys commuting between Tampere and Helsinki, being a father of three, fishing, single malts, and contemplating buying a semi-classic Citroën someday, either a series 1 CX Prestige or a series 1 XM with the legendary XPJ4 engine (only money, time, and a garage still needed…).

Tommi Hyytinen
Tommi Hyytinen works in Finnish Radio Symphony Orchestra as a horn player and in Sibelius Academy of the University of the Arts Helsinki as a horn and natural horn teacher. He is also a member of the Finnish Baroque Orchestra. Hyytinen graduated as Doctor of Music from Sibelius Academy in 2009. The topic of his artistic doctorate was the horn music of the Romantic period. www.tommihyytinen.fi

Christin Högnabba
Christin Högnabba has a musician background with a degree from the Sibelius Academy’s vocal music department. She has worked as an opera and concert singer and also taught singing at Åland’s Music Institute, Ersta Sköndals högskola and Svenska Arbetarinstitutet i Helsingfors. For the last 10 years she has been a freelance singer and has promoted her own concert and opera projects in Sweden and Finland. She has focused on music by lesser-known composers, and since 2015 she has also been engaged in promoting female composers. Since October 2018 she is involved in KVAST’s large project Repertoarrycket III as project manager for orchestra and repertoire issues.

Alexandra Krämer
Early in her studies, Alexandra Krämer discovered her passion for music and the variety of
editions made available to all musicians. Mrs. Krämer moved on to study Musicology and Culture
Management in Weimar & Cologne Germany, as well as Leeds, United Kingdom all while
focusing her education on music editing. During her undergraduate she interned at Bärenreiter,
Kassel, gaining first insights into how a music publishing house works, followed by an internship
at the Beethoven Archive, Bonn. After completing her Masters, she became Assistant to the
Editorial Department at the G. Henle Verlag, Munich. Since 2016 she has been an editor at
Breitkopf & Härtel, Wiesbaden with her main focus being orchestral music. While she was born
in Wichita Falls, Texas, Alexandra has lived in Canada, the United Kingdom and many parts of
Germany. Next to music and reading, Alexandra likes to go rock climbing and hiking in the Alps.

Susanna Välimäki
Susanna Välimäki is musicologist, music critic and writer. Currently she is writing a biography of the Finnish-British composer-violinist Agnes Tschetschulin (1859–1942), and together with Nuppu Koivisto an encyclopedia of Finnish women composers born in the 19th Century. Välimäki is a Senior Lecturer of Musicology at the University of Turku, Finland, and holds a title of docent in musicology at the University of Helsinki. Besides academic activities, Välimäki works as a music critic and produces radio and television programmes on classical music for the Finnish Broadcasting Company.

Dear orchestra librarian in the Nordic and Baltic countries,

It’s my pleasure to invite you to Nordisk Orkesterbiblioteksunion’s (the Nordic Orchestra Librarians’ Association) conference in Tampere, Finland 10th and 11th October 2019.

The conference fee is 100 € and includes the gala dinner and the concert ticket. Please pay the fee by the 13th September. Your registration is considered valid only when we have received the conference fee.

You can also pay the conference fee using PayPal.

If you have questions, don’t hesitate to ask! Please send them to sebastian.djupsjobacka@yle.fi.

The registration deadline for the conference was Friday 13th September 2019. Please contact info@orkesterbiblioteket.net if you have questions regarding your registration.

The hotel is not included in the conference fee. The easiest option for accommodation is probably the Lapland Hotel Tampere, which is located next to Tampere-talo where most of the conference takes place. 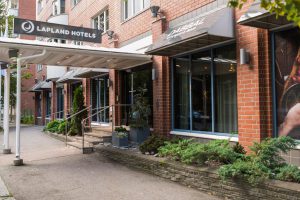